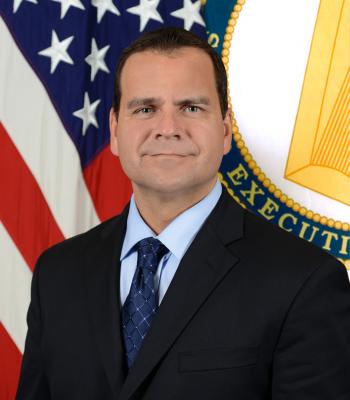 As the program executive officer, Guckert is responsible for managing a diverse portfolio of 36 program offices and 71 acquisition programs that support and field Army and Department of Defense communications, logistics, medical, finance, personnel, training and procurement systems for every domain, branch, unit and Soldier in the Army.

Prior to his appointment, Guckert served as the deputy program executive officer for PEO Soldier since September 2018. In that role, he supported the program executive officer in leading the development, integration, testing, acquisition, fielding, sustainment and modernization of more than 150 diverse programs of record. This portfolio delivers state-of-the-art Soldier kit, including Nett Warrior, the Integrated Virtual Augmentation System, the Next Generation Squad Weapon, the Army Green Service Uniform, personal protection equipment, organizational clothing and individual equipment, Soldier power, individual and crew-served weapons, remote weapon stations, and Soldier-borne sensor and lasers.

Appointed to the Senior Executive Service in 2017, Guckert has over 30 years of government experience in acquisition and systems management, and engineering. Before assuming his position with PEO Soldier, he was the deputy program executive officer at PEO Combat Support and Combat Service Support in Warren, Michigan from January 2017 to August 2018. Before that, he was acting deputy program executive officer at PEO Aviation in Huntsville, Alabama from January through December 2016. From December 2012 to January 2016, he served as assistant deputy for acquisition and systems management with the Office of the Assistant Secretary of the Army for Acquisition, Logistics and Technology (ASA(ALT)) at the Pentagon.

Additional previous assignments include serving as acting deputy program executive officer for Soldier with PEO Soldier in Fort Belvoir, Virginia from August to December 2012; assistant deputy for acquisition and systems management with ASA(ALT) from February 2010 to August 2012; and director of the System of Systems Engineering and Integration Office for ASA(ALT) from June 2008 to February 2010.

Guckert received the Superior Civilian Service Award in 2016 and the Army Staff Pin in 2014. He is a member of the Army Acquisition Corps.